At Marine Construction Magazine, we routinely receive emails and correspondence with regard to issues surrounding safety in marine construction. With this in mind, we thought it only fitting that we would share in upcoming issues of Marine Construction Magazine a current or past safety story that may – in some way, shape or form – prevent the same unfortunate incident from happening to another. If this information causes any of us to rethink a certain assigned job, duty or task, then in some small way this information
may contribute to a safer work environment. We hope so.

IMPROPER VENTILATION CAUSES FIRE IN CONFINED SPACE
Employees were cleaning a confined space onboard a vessel using solvents. The foreman told them to ventilate the space and dilute any vapors with an air hose. The first shift worker brought in an oxygen hose to ventilate the space. The oxygen flowed into the compartment for three hours. A second shift worker entered the confined space smoking a cigarette. He threw the cigarette to the deck and it began to burn
like a candle. When he stepped on the cigarette his shoe and pant leg caught fire. The oxygen enriched atmosphere caused the fire to increase rapidly and he was quickly engulfed in flames. He died as a result of the burns he received.

What went wrong?
The worker ventilated the confined space with an air hose. To make matters worse the worker used oxygen to ventilate the space. Never use oxygen to ventilate any space. Use a blower or ventilation fan. The confined space was not inspected and tested for air quality and flammability by a shipyard competent person prior to entry. The employee was smoking in an area where smoking was prohibited. Employees
should only smoke in designated areas. Employers should place signs where smoking is not permitted.

WORK SURFACE HAZARD RESULTS IN SLIP AND FALL
A welder and his helper were installing guard rails on a dock. The work was being done from a smaller barge that was tied to the dock. The smaller barge was moved along the dock as work progressed. The helper would hold a section of guard rail in place while the welder would tack weld it. The welder would come back later and finish the weld. The icy deck made walking and working surfaces very slippery. While the welder was finishing several sections, his helper reached around the corner of the dock to take a measurement. He slipped and fell into the water. The welder heard his helpers call and ran to him. The welder could not reach him and ran to call for help. When the welder returned his helper had disappeared beneath the water.

What went wrong?
There were no training programs in place to prevent falling accidents. There were no life rings available to rescue the drowning employee. Life rings with at least 90 feet of rope attached must be available and in the vicinity of the work area. Since few work barges have guardrails to prevent workers from falling in the
water, workers on them must wear PFDs or tie off to a secure structure. A ladder should also be available for rescue. An assessment of the work hazards should have been conducted prior to starting work. Not enough attention was given to the icy working surface conditions. Pay attention to work surface hazards and abate them.

SCAFFOLDING COLLAPSES, WELDER FALLS
A welder was erecting scaffolding inside a vessel that was under construction. The welder attached the scaffolding to the bulkhead using brackets clips that are temporarily tack welded in place. The welder was trained and certified to install and weld these type of clips. After he finished assembling the scaffold structure with temporary welds the welder walked out onto the scaffold boards. One of the bracket clips failed causing him to fall 18 feet to the deck below. He died from massive injuries.

What went wrong?
The bracket clips which require full welds were only tack welded. The welder should not have climbed onto the scaffolding with tack welded clips. Welds must be inspected before a scaffolding structure is placed into use. The welder was wearing a body harness, but did not tie off. Always wear a full body harness
and tie off at heights of five feet or more. When accessing scaffolds ladders should extend three feet above scaffold boards.

What To Do If A Boat Lift “Drifts” 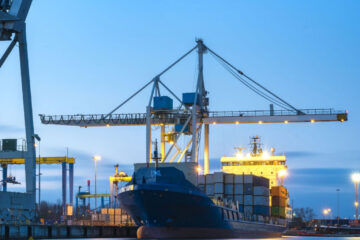 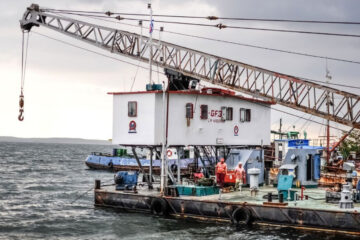 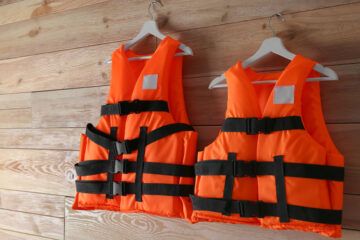